Strange Neighbors
The Wretched
The Bologna Incident
The Trial

Lisa was a tall brunette wearing a blue jumpsuit with brown gloves and shoes. The gloves are noticeably damaged as is evident by the patch that is sewn on one of them. She also had very droopy eyes due to her work.

Lisa was a very kind, warm, and welcoming person. Welcoming her future husband; Jim Johnson, with open arms despite his fragile and somber state of mind at the time.

This courteous attitude continued even after her husband's disappearance when she first met Sal Fisher, though she was startled by Sal's mask at first, she quickly warmed up to him and offers to introduce him to her son.

In the more peaceful and mundane years of Addison Apartments, Lisa Garcia led a very calm and uneventful life under the Addison family's employ. That is until she meets a mysterious visitor in the form of Jim Johnson, where she welcomes him, clothes him, shelters him, and later, marries him.

Lisa's marriage with Jim was happy when she gave birth to Larry and was later expecting a daughter, but things started to change when Jim worked with Alyson Rosenberg and the local cult known as the Devourers of God.

Eventually, Red-Eyes began to torment Jim and misfortune befell the family when the daughter was stillborn and her husband later vanished without a trace. This left her and her son alone, heartbroken.

When Sal Fisher arrives at Addison Apartments the day of Sandy Sanderson's murder, Lisa shares her sympathies with the newcomer and affirms that things aren't usually this gruesome in the building. Eager to help the boy settle in, Lisa introduces him to her son Larry.

When questioned about her wellbeing, Lisa explains to Sal her concern for Larry's adamant beliefs that he was cursed.

A couple of months after the arrest of Charley Mansfield, Lisa falls ill with a very bad cold and is bedridden for a few days under the care of her son.

During the events of the Bologna Incident, she is seen repairing the plumbing in their kitchen. She is eager to spend time with Henry Fisher and Sal when the latter proposes a movie night for the following weekend.

In the years that followed, Henry and Lisa got married and moved into Room 402 of Addison Apartments together. Unfortunately, their happiness was cut short by Sal after they were infected by Red Eyes. 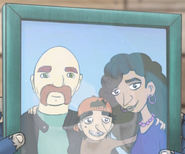 Lisa along with her son and husband 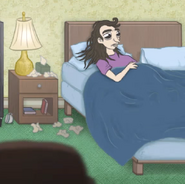 Lisa got sick
Add a photo to this gallery 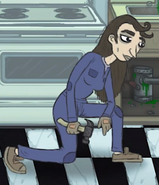 Lisa repairing the plumb
Add a photo to this gallery

Lisa and Henry, infected by Red-Eyes

Lisa and Henry, murdered by Sal
Add a photo to this gallery

Retrieved from "https://sally-face.fandom.com/wiki/Lisa_Johnson-Fisher?oldid=10808"
Community content is available under CC-BY-SA unless otherwise noted.