The Wretched
The Bologna Incident
The Trial

The Gear Boy, later modified into the Super Gear Boy, is a handheld game system owned by Sal Fisher that can also be used to detect supernatural hot spots. It made its first appearance as the Gear Boy in Strange Neighbors.

Introduction in the game

The Gear Boy was found near the TV in Sal's room with some weird game. According to Sal, it lights up when Megan is near but it doesn't light up every time.

With Larry's antenna from his police scanner, few extra parts from Sal's Walkie Talkie and his own equipment, Todd upgraded it into the Super Gear Boy to better detect supernatural hot spots. Now Sal can both play games and use ghost hunting mode with it.

You'll need to hold the system out with the antenna fully extended by pressing the "Shift" button, the screen will glow if it detects any paranormal frequencies in close proximity. While it's flashing, press the "R" button to produce a large electrical discharge. The surge of electricity will provide an ample source of power to energize nearby apparitions and other supernatural elements as well. In addition, Sal can use it to play the game In Seeking Providence that reveals some of the game's lore. 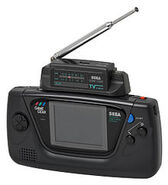 A Game Gear with TV Tuner plugged in, the real-life counterpart of Super Gear Boy
Add a photo to this gallery

Retrieved from "https://sally-face.fandom.com/wiki/Gear_Boy?oldid=9446"
Community content is available under CC-BY-SA unless otherwise noted.