Charley Mansfield is a character found in Strange Neighbors and referenced in The Wretched.

Charley is an overweight middle-aged man and fits the general description of a freeloader. He wears a tank top that is covered with a few yellow stains and he is always seen wearing his socks. One has a hole in the front, and he seems to be balding.

Upon first meeting him, Charley acts arrogant and threatening, but later is friendly and sometimes a bit rude. He has an obsession with his collectibles, and always checks to make sure Sal doesn't touch them.

Prior to the arrival of Sal Fisher, Charley was possibly involved with the local cult that was making an effort to bring a demon into the physical plane and even served as the deity's host to butcher Mrs. Sanderson likely out of spite for her interference in the cult's plans. Why Charley stole the Glitter Pony other than to complete his collection remains unclear (there is a possibility that Red-Eyes was tying up loose ends and the "cops" that appeared at the apartments were just disposing of the fat man and capturing a patsy that would later be proven innocent).

Charley first meets Sal when he knocks on his door while introducing himself to his neighbors. Charley allows Sal to come inside, and Charley immediately starts telling Sal about his collection, boasting of the challenges he underwent to complete his set of Glitter Ponies.

When Sal learned from Larry Johnson the deeds Mansfield committed, he offers Charley a cup of tea spiked with laxatives from the restroom of room 504.

Charley eagerly ingested the "new recipe" of Addison Tea only to be torn away from his chair to the restrooms, allowing Sal to snatch his rare, blood-soaked, Glitter Pony that he pilfered from Sandy. Charley is hauled away and placed under arrest by the local "officers", however, an imposter is incarcerated in his place thanks to the cult's influence in the community.

Amidst Sal's dream a few months after the incident, Charley appears, chastising Sal and sharing his knowledge about stealing his prized toy, declaring that he thought them to be friends. The Dream Charley sheds his skin to reveal the Red-Eyed Demon had been using him from the start. 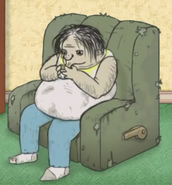 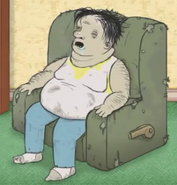 "I'm innocent, I swear. I thought you were my friend!"
Add a photo to this gallery

Charley with a zipper on his face during the dream sequence

Retrieved from "https://sally-face.fandom.com/wiki/Charley_Mansfield?oldid=8411"
Community content is available under CC-BY-SA unless otherwise noted.