Charley had them all collected and tucked on the shelves in his apartment room during Episode One.

Charley's Collectable Pony is a pink plush pony that sits on a pp top of a shelf in Charley's room in Addison Apartments. The pony is present in Strange Neighbors and is later confiscated by the authorities as evidence of Charley's connection to Mrs. Sanderson's murder.

The pony has a cat-like face, with large almond shaped eyes. It has both wings and a unicorn horn that are tinted pink, and a yellow tail and mane. Its hooves are stained red, most likely from Mrs. Sanderson's murder.

In The Wretched, it appears more monster-like.

It is believed that this pony was originally owned by Mrs. Sanderson before Charley (possibly under the control of Red Eyes) stole it to add to his collection. Sal Fisher is first introduced to the pony and the rest of Charley Mansfield's collection as he meets his new neighbors.

Sal later finds out that Larry Johnson witnessed Charley kill Mrs. Sanderson for the pony while he was fixing her plumbing. The authorities will not believe Larry without evidence, so he asks Sal to help get Charley arrested.

After learning of Larry's eyewitness account of Mrs. Sanderson's murder, Sal returns to Charley's room to look for Mrs. Sanderson's missing plush. He spots the pony with red stained hooves, and devises a plan to retrieve it.

After Sal brings Charley tea from Mr. Addison with sleeping medicine (or laxatives) in it, Sal is able to confiscates the blood-stained plush and give it to the detective. After this, the detective and his partner confiscate the rest of the pony plushes and place them in an evidence box.

What happened to the collection is unknown, but it is believed that the authorities, later revealed as members of the Cult, got rid of the evidence.

Glitter Pony is the pink alicorn monster-like pony that appears in Sal's dream during The Wretched.

In this dream, Glitter Pony is deformed and looks visibly emaciated. Its mane, tail, and fur is visibly matted, and its wings look brittle. The pony has sickly yellow eyes tinged with red, and green barred teeth.

In the sewers, it asks Sal for help because its water supply has stopped, making it thirsty as a result. Sal agrees to help it. After pressing a series of buttons and traversing the pipe system he successfully restores the water flow.

When Sal returns after completing the work, the pony is unresponsive and had become engorged with water. The pony's bloated form fills the gap that it was inhabiting, allowing Sal to cross.

After Larry places the Creepy Pony in the pentagram in room 204, Sal gains access to the second-to-last tape.

The pony, second from the left on Charley's top shelf. 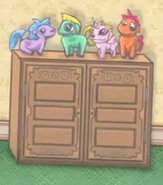 The pony, second from the right in Mrs. Sanderson's room
Add a photo to this gallery

The Glitter Pony swollen after water floods the tunnel.
Add a photo to this gallery

Retrieved from "https://sally-face.fandom.com/wiki/Charley%27s_Pony?oldid=7191"
Community content is available under CC-BY-SA unless otherwise noted.