Addison Apartments is the apartment complex that all the residents live in. Terrance Addison owned the complex and was the established landlord. It is apparently hundreds of years old, according to Lisa.

Many years ago, a young Alyson Rosenberg sold her family's land to the wealthy Addison family who began to construct a temple of their own that honored the same religious beliefs as the local cultists in the Phelps family.

But as the years went by, the Addisons used the land to stage housing developments and tore down their temple in the process. Unfortunately, when Red Eyes was called into the physical plane, all of the members were infected, including Terrence. The young boy managed to resist the shadow demon long enough to murder every member of his family to stop it from spreading. From that point forward he remained in the confines of his room, slowly becoming less and less human and fulfilling his destiny as The Endless One.

In the days leading up to the arrival of Sal Fisher, a Cult known as the Devourers of God ran multiple rituals directly beneath the apartment building in an old temple where they carried out their mission to bring Red Eyes back again.

If was from this point forward that the apartment trapped the spirits of anyone who dies within its walls forever, including Red Eyes.

The apartment building was going through financial difficulties during Sal's stay and still had an unfinished fifth-floor undergoing renovation after the murder of Stacy and Megan Holmes at the hands of a possessed Luke.

Presently, the Apartment has long since gone to pot and decay, with great deals of graffiti sprayed all over its exterior. It was clearly never repossessed after all of its residents, with exception of Maple, were slaughtered by Sal Fisher.

Addison Apartments during the wintertime

The Day of the Slaughter 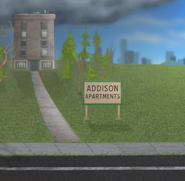 Addison Apartments, as seen in The Trial
Add a photo to this gallery
Retrieved from "https://sally-face.fandom.com/wiki/Addison_Apartments?oldid=10039"
Community content is available under CC-BY-SA unless otherwise noted.